Thursday began as usual with shaking reluctant children awake for school as they lay ignoring their blaring alarm clocks. Naomi was late again. Phoebe missed the bus, and only Chloe got moving on time.  The morning was spent cleaning house and the afternoon was studio time, doing our work, trying to meet our deadlines. It's our best time of the day, Mike and I just working and listening to music or half watching a movie.  Studio time is always over too fast and before I know it I'm back in the car racing back and forth across town during rush hour to pick up kids from school, and in the case of Thursday getting Phoebe back to school again for her opening night.  Her school theater group was performing "I Never Saw Another Butterfly".  She had the second lead role and was amazing.... 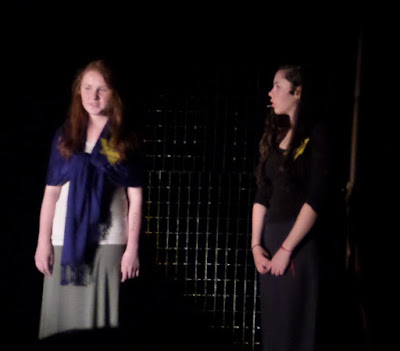 The play was acted, directed and performed by students.  The teacher that runs the group, Mrs. Lang (Phoebe's hero), acts only as producer and advisor. 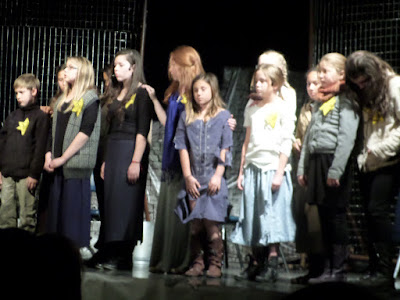 All the kids did an incredible job and there wasn't a dry eye to be seen at the end. 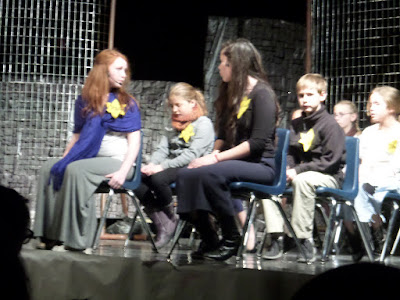 Of course the subject matter was very intense.  Jewish children living inside a Nazi concentration camp is bound to be a downer.

Friday started much the same as Thursday. Racing kids to school, walking the dog, morning house cleaning... The exception being I was called in to sub an art class. In the last 2 weeks I was hired by a company called Abrakadoodle to run children's art programs around the valley.  I've been training but this was my first day on the job.  Teaching on Friday I had a class full of very excited 7 year old boys.  One of them was flirting with me, so I told him I was married.  His friend shrieked and said "Are you crazy, she's like 29!!"  So now I'm 29. It 's awesome.

Saturday I rolled out of bed at 5:20am and shook Chloe awake.  By 6:30am we were on the road to Tucson, for Park Place Chalk Art Festival.  We arrived by 8:45 and I found my designated area.  As I began to grid my square of concrete people began to come over and ask questions.  "What are you drawing?" "How long will it take you?" and my favorite "When will you be finished?" (Keep in mind that I have drawn four lines at this point.) 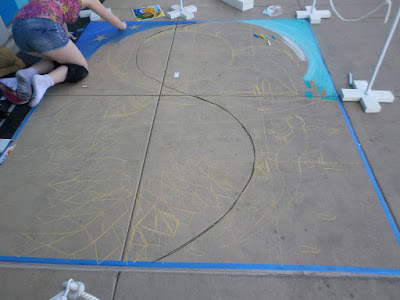 After about 20 minutes of sketching in my design, Chloe and I began the sky. 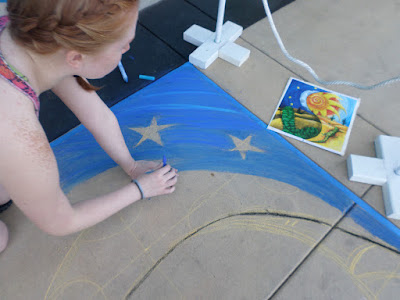 Here she is working from a print of my painting. 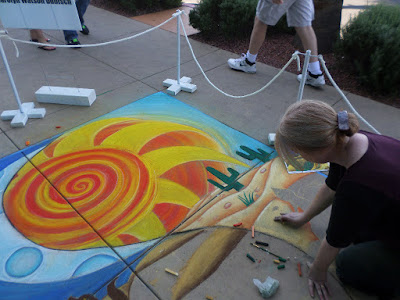 By the time the morning was over we'd made a huge amount of progress.  This is well after lunch on Saturday.  The festival was quite crowded and the questions people asked never stopped.  "I saw this festival in the paper this morning. Did you see it in the paper too and just come down and set up?"
"No, I was paid to be here and assigned this spot"
"This is the best one so far! You're going to win!"
"This is not a contest, all the artists were judged beforehand."
"How can they judge your work before you do it?"
"I submitted my drawing and I was selected, so we all win."
"Well how can you all win?"
"I was kidding, all the artists here are paid."
"When will you be finished?"
"GAH!" 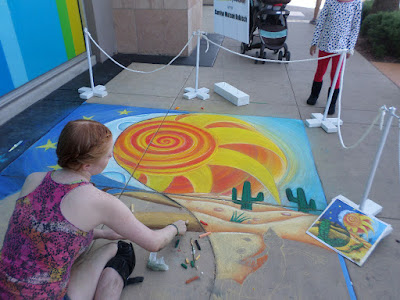 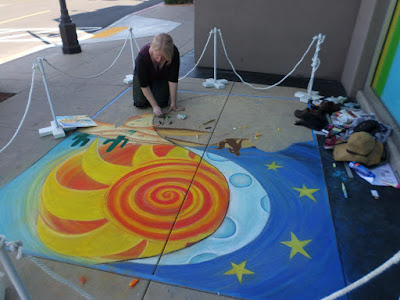 As you can see we made a lot of progress on Saturday. 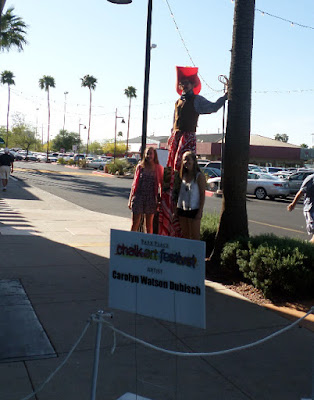 This cowboy on stilts kept walking past and chatting us up. 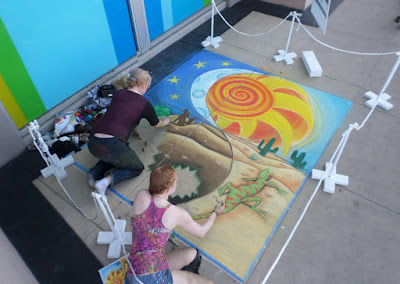 Finally he came by and offered to take a photo from his view.  I think it's the best photo we got all day.  As we worked a woman walked past and said "Oh it's lovely, are you two related?"
"Yes, this is my daughter!"
"Oh you don't look old enough to have a daughter that old."
"Oh, well, I am only 29." She walked away quite confused. 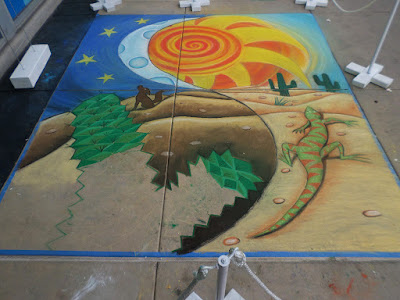 This is where we stopped at 5pm that day.  We attempted to wash ourselves off in the mall bathroom amid many stares and headed over to the hotel.

Sunday we awoke around 6am even though we didn't have to be back until 11am.  I ate some disturbingly crunchy eggs at the hotel's continental breakfast, while Chloe ate the chewy pancakes.  We lingered for awhile but then headed back to finish the mural. 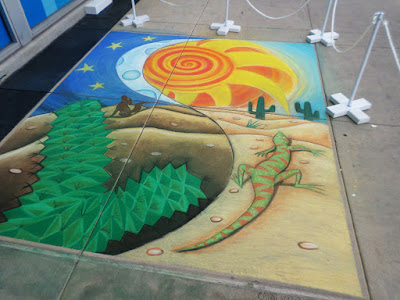 We picked up some Starbucks (conveniently located next to our mural) and got back to work. We were on site an hour early and finished the mural 15 minutes into the second day of the official start of the festival.  Of course the questions kept coming.... "How did it take you to draw this?"  "AAAH!!" -That scared them off.  By then I was very sore from working on the pavement and a little sick of the same questions over and over and over......

Since I couldn't get paid until 1:30pm we decided to clean up and take a walk around. Some of the work was amazing. 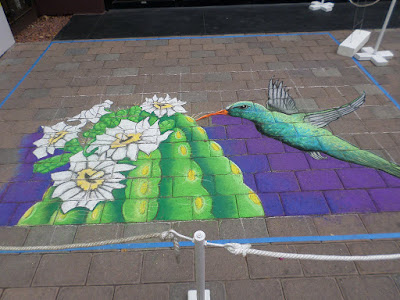 This artist was working in the back courtyard on bricks which is a tough surface. 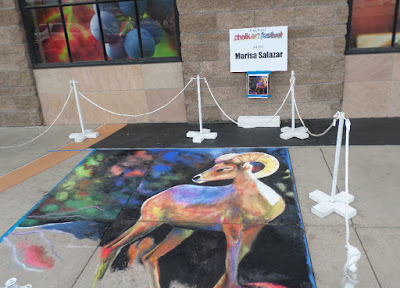 This artist was creating an amazing mural from a photo. 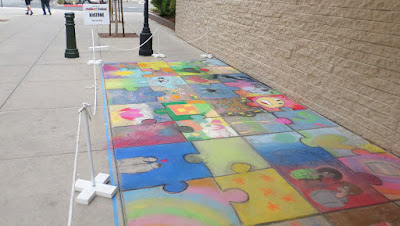 This is the "Kids Zone" where each coloring space is a puzzle piece they give you to draw in. 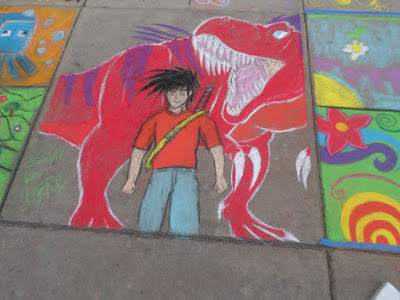 One of the pieces from the "Kids Zone". 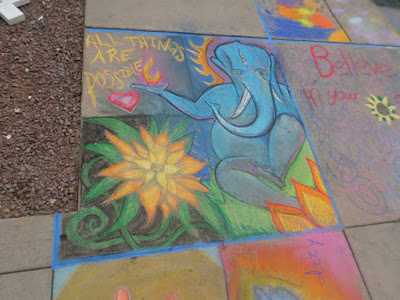 I liked this Hindu elephant from the kids area. 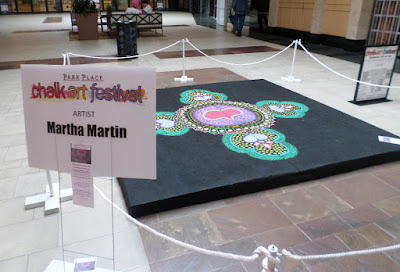 This artist was given an indoor work area.  Her mandala is still in progress in this photo. 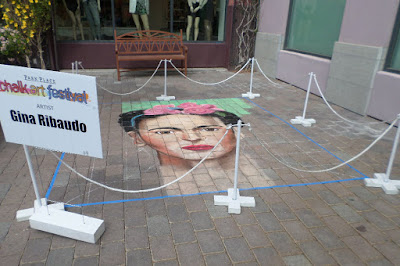 A portrait of Freda Kahlo, was in the back courtyard. 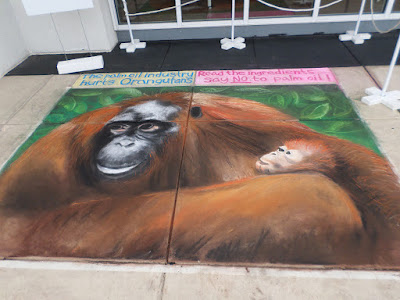 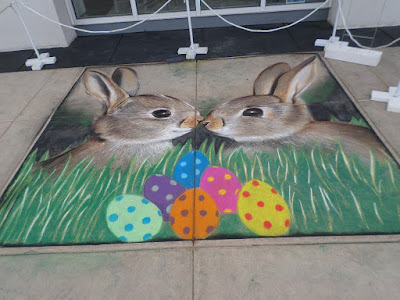 Some pretty bunnies for Easter, by José Ignacio Garcia 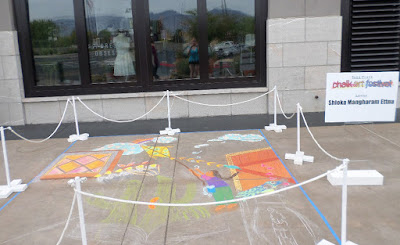 Shloka was working just up the sidewalk from us.  I really loved her whimsical drawing. 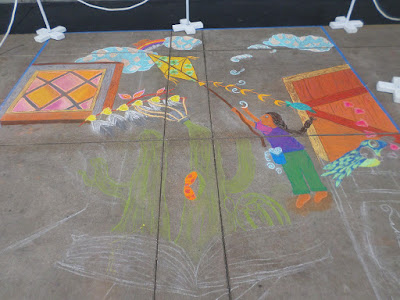 My regret is that I didn't go back to see her finish.  I could tell it was going to be great. 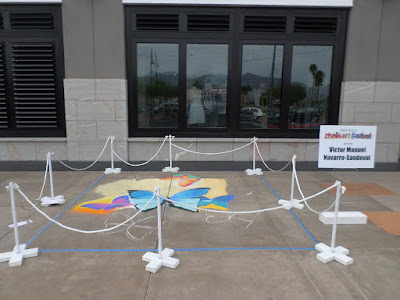 Victor's butterflies.  Another one I didn't see finished. 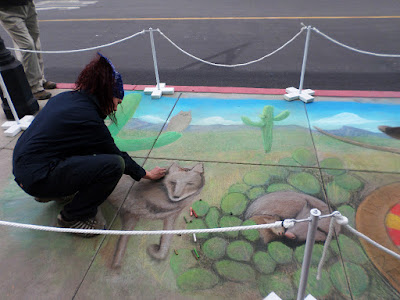 And Cynthia's wildlife image was coming along really well!

Around 1:30pm we had walked the mall, ate in the food court and seen all the chalk murals, so I went to see if I could get paid.  I found the director and was given my check, and as I walked to the car I saw that someone had released their small child onto my mural.  It was covered in footprints!  So I got more chalk and wound up working another 20 minutes, all the while muttering " The sidewalk over there is for walking, this sidewalk's for looking at."  (I was maybe losing it a bit). Anyway, Sunday afternoon at 4pm we stumbled through the door back home in Phoenix.
Email Post
Labels: chalk art chalk festival holocaust I Never Saw Another Butterfly Night and Day play

Carolyn Watson-Dubisch said…
Thank you Marisa! I never saw yours completed, but I loved what I saw of it. Is there a photo online?
April 26, 2014 at 7:58 AM