[watching a green Homer being taken down by the cops]
Stan Lee: He can't be the Hulk... I'M the Hulk!
[rips his shirt open, growls, and tries to change into the Hulk]
Comic Book Guy: Oh, please. You couldn't even change into Bill Bixby.
Stan Lee: Come on, dammit, change!
[continues to growl and signs]
Stan Lee: Ah, forget it.
[goes back to growling]
Stan Lee: I really did it once.
Comic Book Guy: Yes, yes. I just wish you had the power to leave my store.
[they go back inside and Stan Lee starts growling again]
Comic Book Guy: Almost had it there.

Well, Stan Lee did leave the store and starting today he's in San Diego for San Diego Comic Con (along with everyone else it seems).  I'll be there tomorrow at The Cartoon Art Museum booth(#1930) , and again on Sunday.  But Mike (my husband) well, he'll be there all week and tonight he's at booth L15 in the Small Press Pavilion, but his schedule is more complicated than that for the rest of the week and I can't keep track. :) 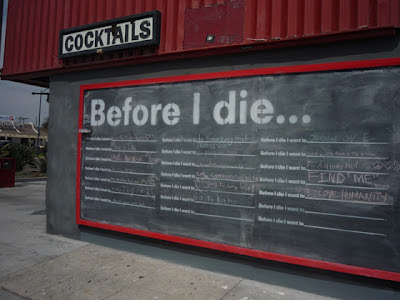 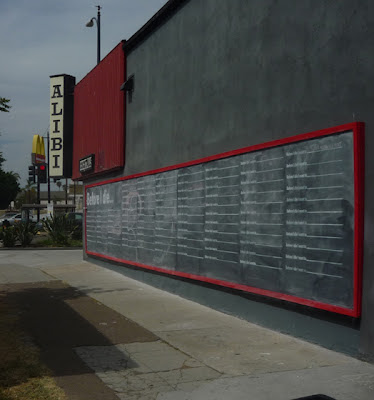 This week I've been driving Chloe up to her theater camp in Balboa Park every day and a new interesting exhibit was just put up along our driving route.  It seems to be an interactive display that changes quite a lot.  I pointed it out to Chloe and said. "My favorite one is Before I die I want to ride a unicorn- it's rather unlikely, though."
"Yeah, but if you had a chance to ride a unicorn I'd take it wouldn't you"
"Well, only if it's over a rainbow!"
"That would be better, but it seems a little more likely AFTER you die"
"That's true... Or maybe in coma dream!"
So in conclusion it should read...
Before I die I want to ride a unicorn over a rainbow in a coma dream....

Anonymous said…
Just dine in here Pizza Hut to get inspiration to create again. I like your post, interesting design.
July 12, 2012 at 12:13 AM

Anonymous said…
Lol that's so funny. i don't know though, i might the only person in the world that'll take off running if i ever came across a unicorn. no ma'am, no unicorns haha
July 18, 2012 at 11:58 AM