This past weekend was the H.P. Lovecraft Film Festival up in L.A. and Mike (and his art) was part of the show.

Here he is at his table.

Pictures inside buildings don't come out so well with our camera... Hmmm...Maybe it's due to all the dropping on concrete or the fact that it's held together with tape.

The girls were able to sit around through one movie. Then we went to the Maritime Museum. Which was closed-but they had some great stuff outside!

Here they found a propeller to slide on!

While we were in L.A. we decided to go visit the Getty Center up in Brentwood. There's a tram up the mountain to the museums.

We headed straight for the Gerome show (an Academic painter from France). My 2 youngest kids were instantly bored, so I told them to "count the lions in all the paintings in this room". After several similar activities I was approached by a guard, who said my kids were "pointing and standing too close". So I told them to be careful. Then the guard turned and lectured them again. Then my husband saw them sit, frustrated on a bench in the center of the room and 2 more guards came over and lectured them for having pointed and standing too close (at THAT moment they were doing nothing). Then they approached Mike and told him the same thing (that the girls had pointed and stood too close). So we left. Gerome's a brilliant painter and we've been wanting to see a show like this for many years, but that was a nightmare.

We took them down to the children's room.

Then up to the sketching gallery.

Then we found umbrellas for public use and went for a stroll through the gardens. 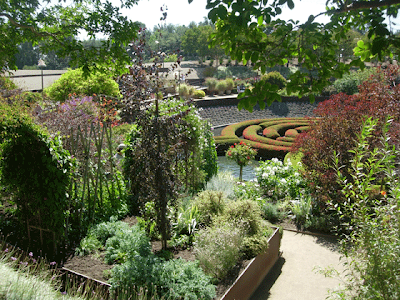 The central gardens are incredible!

Too bad it's floating on water.

It's me- finding some shade!

We wandered into one of the sculpture gardens

This is a bent sheet of metal (some art I just don't get.).

The Getty is a nice place, but if you have kids just sticking to the gardens and the children's room is the way to go.  Kids aren't so welcome in the galleries.
Email Post
Labels: Art Museum Gerome Getty Center H.P. Lovecraft Los Angeles Lovecraft film festival