Halloween is over.... Phew!

Recently I saw someone post online "I don't really like Halloween, there I said it". Honestly, this is like saying you didn't like the most recent "Shrek" movie. It's for children. Completely tailored to kids in every way. You are not the audience. It's strange how people don't get it. If you want to like Halloween, spend it with your grandkids. If you want to like Shrek, watch it with some children. I even enjoyed the "Teletubbies" when I saw how my one year old responded to it. Once Mike's grandfather put the show on for Mike and I while our daughter was sleeping. It was pretty awkward explaining that it's not our favorite show. 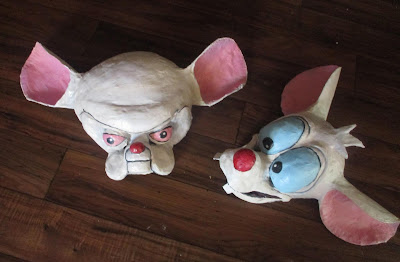 The lead up to Halloween was pretty hectic in my mask shop. I managed to finish these Pinky and The Brain masks in time and so, so many other masks that it would be tedious to talk about. 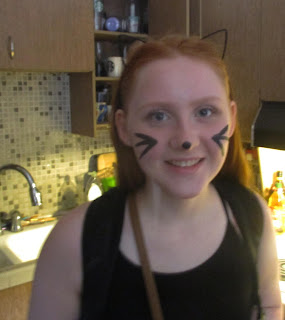 This is Naomi on Halloween morning before school. She had on a cute black dress and went out that night with friends. She really seems to like her school now, which is great! She also seems to be doing well in classes.
Phoebe's midterm grades came in and she's got all A's (as usual for her). She's also really liking her time at the Oxbow school. They have artists in residence who come work with the teens and she's created some incredible work!
Chloe is really enjoying her time in Scotland and has made it her mission to travel on weekends when she can. Apparently finding cheap flights within Europe from Europe is much easier than finding them from here. She went to London, and Paris with friends, and now her best friend from her dorm has invited her home to Sweden one weekend. Her friend helped her find a flight for 20€ online.
It's an amazing thing to have all three girls happy at their schools at the same time. The last time this happened Chloe was in 3rd grade, Phoebe was in kindergarten and Naomi was at Humpty Dumpty preschool.... So it was a long time ago.


In the meantime I've been trying to build a big portfolio on my Red bubble account. This piece is new to the site, it's called "Cliff Hanger" .  It's from my "Child in Peril" collection.


This one is called "Night Fishing" There's many more images that can be purchased as prints, on t-shirts, posters, cell phone sleeves, laptop covers, bags,  and pillows. This particular site is the best one of these I've found, as the proceeds for the artist/designer is much more. A few years ago I tried to put up over 100 images on a site called Zazzle and I only received a few cents for each sale. It took over a year to make $50 and then for taxes I had to give up a third. If I'd done that on Red Bubble I'd have made hundreds in passive income.  Anyway I still make my pennies on Zazzle but I'm focusing on making some here now.
Email Post
Labels: artisan masks Glasgow Halloween High School Masks monster art red bubble school Scotland The Oxbow School