Masks, a head dress and a search for the typhoid vaccine

Chloe has already gone back to school in Missouri. Her last day in Phoenix was a hectic one, as she hadn't really packed at all, but I'd made her an appointment at the Walgreens on the corner to get her vaccine for our trip to Morocco. She wasn't sure yet about coming home on Spring Break so I wanted her ready to go when she arrived home before our trip in May.

It sounded like a good idea. She has a quick appointment then gets her typhoid vaccine and home again to pack and get ready.....But all good plans.... Anyway upon arrival she had forgotten her ID, so a quick trip home and back was the very first step. Then it turns out they like to prescribe the oral vaccine which is taken every other day for 3 days and is stored in a fridge, except she was leaving on a plane in the morning, so that won't work. The clinic nurse prescribed a shot to be given at a pharmacy across town (that Walgreens didn't have it). So we got on the road to next Walgreens. Upon arrival we learn that while they have the typhoid shot in stock, the pharmacist there isn't certified to give it to her. After much waiting and many phone calls we are sent off the Scottsdale to a pharmacy there. Now it was inching towards rush hour so getting there took a good long while but once arrived she was whisked to back and voila!! Chloe won't get typhoid!! (She did get a sore arm however.)

Phoebe and Naomi are also back in school of course. Though it's a slow start with the holiday weekend last week and I've been busy with many mask commissions. 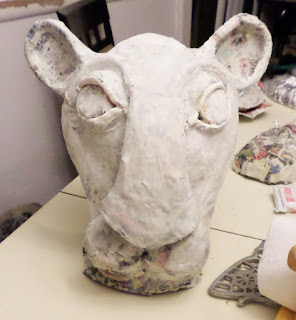 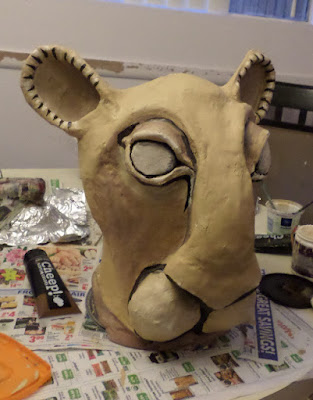 Here it is finished. I sculpted it attached to a baseball hat, but still had to add a strap. They may want me to work on more head dresses, but I'm still waiting to hear. 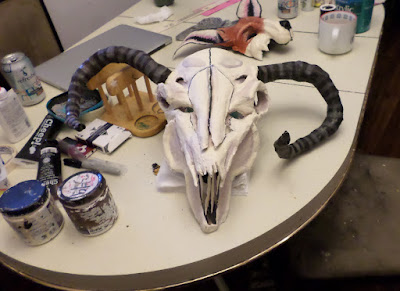 This is a cow skull mask I'm still working on for a film in California. It's mostly finished, but the director wants some changes on the horns. I've also been filling tons of other orders and illustrating a children's book called "Hockey Toes" (I'll share some images soon.). Next week I go back to my teaching schedule as well.

The weather here is gorgeous however and we've managed to take some great hikes with the dog around the city.  This is one of the best times of the year in Phoenix, so I hate to spend it all at my desk! Anyway, Happy Wednesday!
Email Post
Labels: back to school cow skull mask Lion King mask Morocco musical Nala play skull typhoid shot typhoid vaccine