Early Saturday morning, Mike, Naomi and I set out for Tucson to work The Park Place Chalk Festival. I'd been selected to recreate my painting "Beneath The Waves" at the event. This painting was inspired by my friend, Blaire Allen's story of rowing in New York Harbor when a massive sea turtle swam under his tiny boat, so I was enthusiastic about creating a huge version for the public. 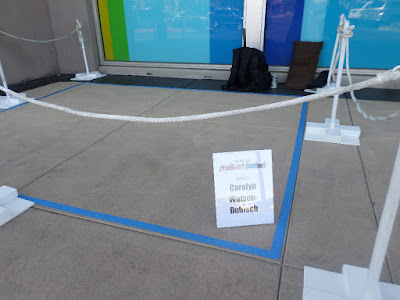 Since I'd only had my surgery 10 days ago, Mike wanted to come and help to make sure I was alright. Naomi agreed to assist as well, so I had a team this time! This was my space when we arrived. 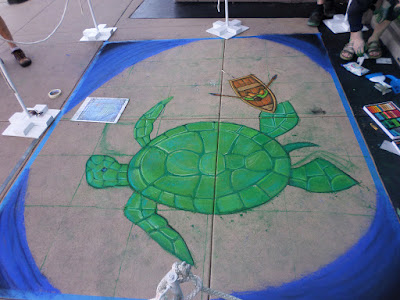 We'd already done so much by lunch with 3 of us! 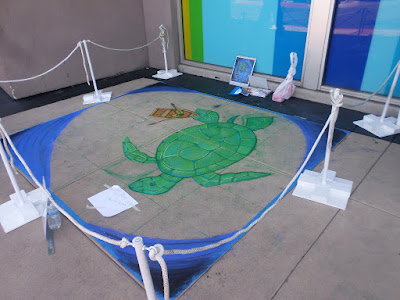 This was a good thing, though, because for the first time since I'd started doing these chalk events we were expecting rain on Sunday! Better to get as much done as we could. 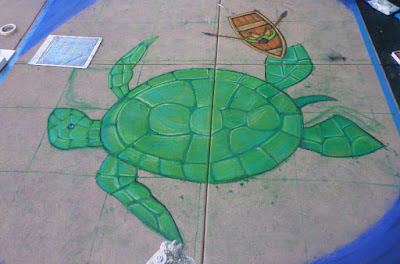 Anyway, after lunch we decided to walk around and see other artists and some of the public drawings... 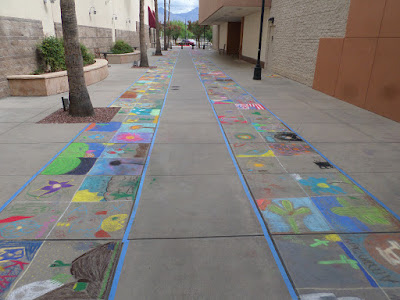 This is the Kid's Zone. 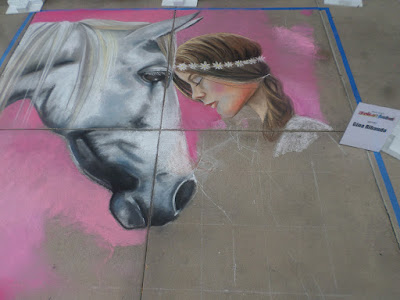 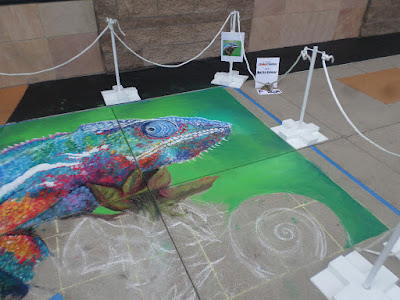 I loved this chameleon. 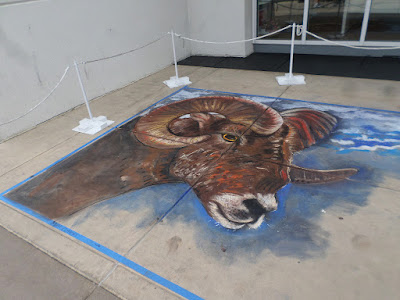 A fabulous elk by Matt Cotten. 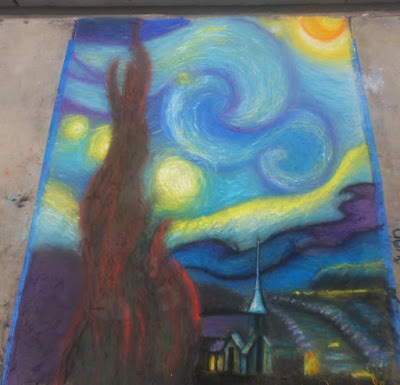 This "Starry Night" was recreated by a member of the public! 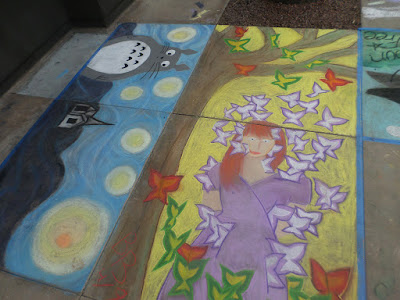 More great art by the public. 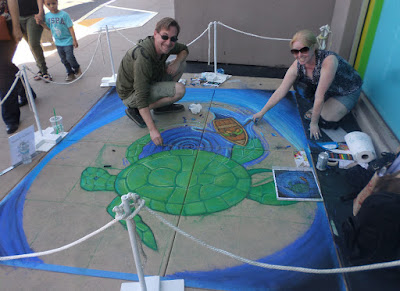 After lunch all three of us started in with the blue. This image had A LOT of blue water and we were all very, very blue by mid afternoon. 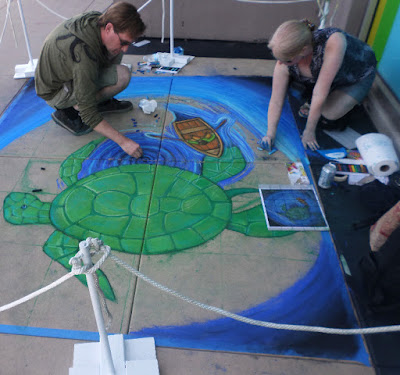 One thing that was interesting is that most people when they asked questions addressed them to Mike. They thought that of course the man that was here was in charge. I didn't care that much, but Mike muttered a lot about our sexist society.
Anyway some people did  talk to me at the mural, but when I wandered through the mall to wash up in the ladies room, covered in blue chalk, women quickly steered their kids away when they saw me coming. 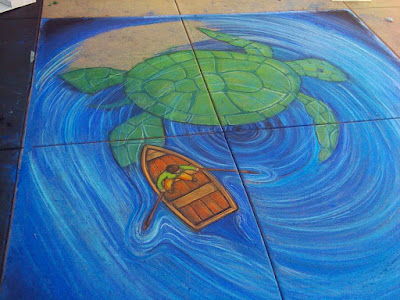 This is where we ended on Saturday. We didn't leave much for Sunday because of the coming rain. 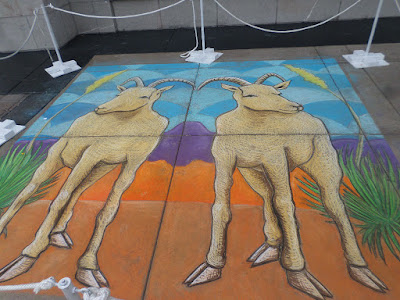 This other artist from Phoenix finished Saturday night she was so worried about the storm. 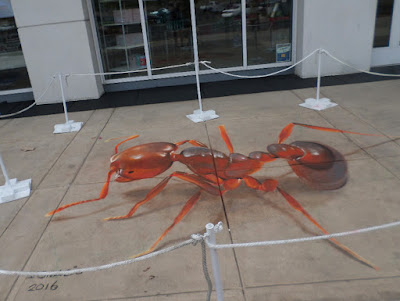 Ignacio also finished his 3D ant that night, but said he'd come back to photograph it melting in the rain. 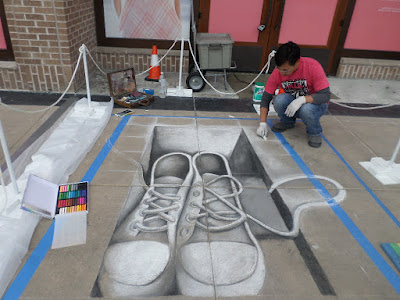 This is our closest neighbor to our spot. Stan worked on his 3D shoes until midnight on Saturday so he'd finish in time before the downpour. They look fabulous. He also brought plastic and gave us some to cover it when we finished. 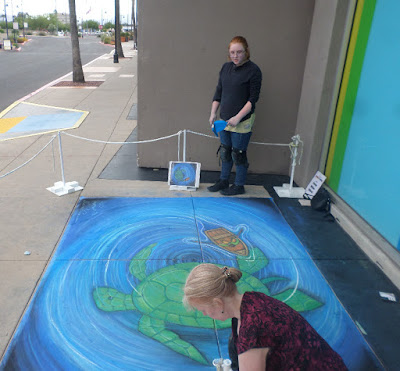 Here we are finishing on Sunday, 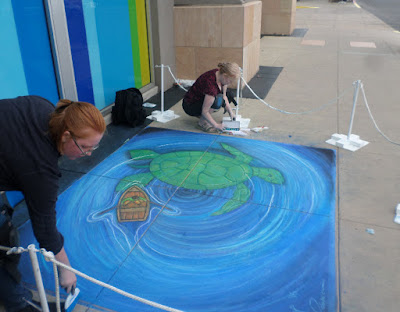 Cleaning up at the end. 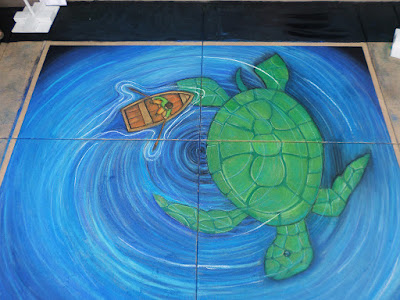 The finished mural, "Beneath The Waves" 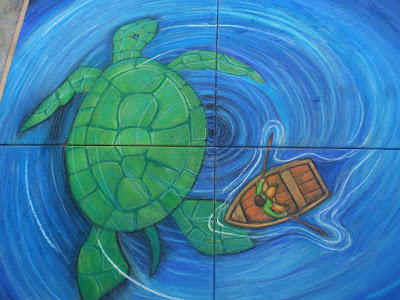 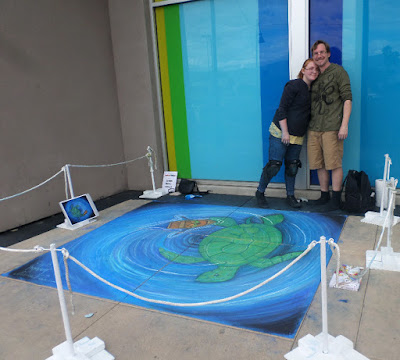 Mike and Naomi at the end. 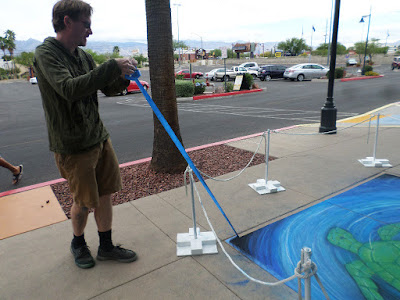 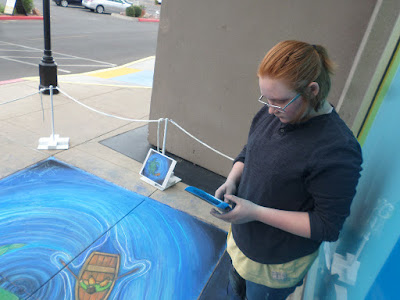 Naomi at the end. 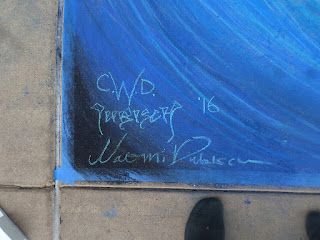 Signed by all of us.
We left it uncovered for a while, but with the storm coming we had to cover it before we left.... 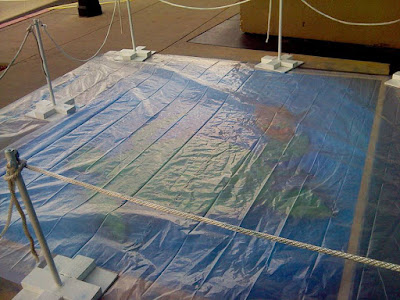 As we drove out of town the rain hit us fast and hard and two hours later we were drenched running in from the car to our front door back in Phoenix.