The title of this post sounds miserable, but actually June so far has stayed in the "pleasantly warm" range (meaning less than 100ºF on many days). We've even had rain. RAIN!!  On Monday when I was out to breakfast with Mike I overheard the waitress as she seated other customers...
"I heard it might rain today!"
"OH NO! I hate the rain."
"Really? Well, I'll be back for your order."
(When she said "Really?" -that meant, "Oh you're not from Arizona.")

Much of the last couple of weeks I've been running art camps for kids.  One day when it began to pour all the children screamed and began to dance in front of the big picture windows.  It was pretty hilarious. However like most things though the cooler weather(if you can call 98ºF that) is coming to an end and for next week it'll be up to 112ºF.

On Monday I heard the fabulous news that my skate deck that I'd designed and painted was selected to be in the "She -Deck" show at {9} The Gallery downtown. 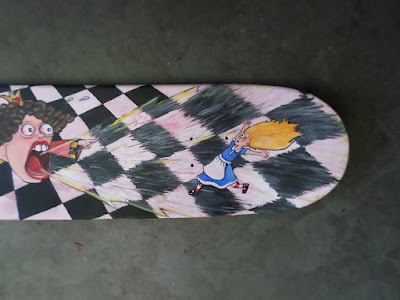 I was a little nervous as I'd never painted anything like a skate deck for a skateboard before.

Because it's an object, I went ahead and painted both sides.

The theme of the show is skate decks designed and painted by women and girls, so Chloe also decided to try her hand at it. 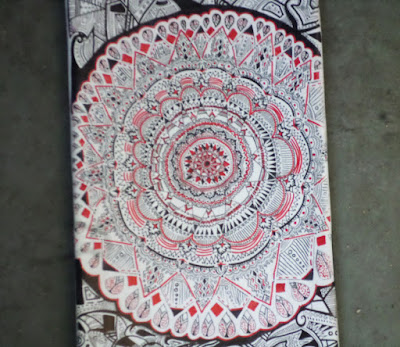 I was thrilled to learn her deck was also accepted!  The show will open on June 19th at 6pm.  Come on down if you're in the area (there will be free food and (probably) free booze!).

In other news Chloe took her S.A.T. last weekend, which she declared was super easy!  (sounds good, right?) and is getting packed for her trip to Las Vegas this weekend with her youth group. Phoebe's got us running her to theater camp at Valley Youth Theatre these days. They're putting on a big production of "Honk" at the end of the month. Naomi is working her way through a huge number of books that she has loaded onto her nook, given to her by my brother during her big trip to Washington.

Last week Mike and I celebrated 21 years of marriage with an evening of Ethiopian food and "Mad Max" (the new one) in 3D. The food was great and the movie was ridiculous!  Have an excellent week. :)