Looking to do something stupid?

Why not spend the summer in the sweltering Sonoran Desert? That's all I can think about lately as we enter the month of April.  Chloe said the kids at her school are wanting summer to come because they'll be off, but at the same time they want this month- this perfect month of cool breezes and orange blossoms to never end. I've been asking advice from anyone who will listen on getting through the summers here.  This is what I've gathered so far....

#1.  Get a big floppy hat and WEAR IT!
#2.  Don't go out between 10am and 4pm unless it absolutely can't be avoided.
#3.  Drink lots of water until your urine is clear.  (I giggled at that one, but my neighbor was dead serious and nodded sternly.)
#4.  Become a vampire....Well that's what it will feel like doing everything before dawn and after dusk.

Anyway, I'm getting nervous.  I've done extreme cold for months and months on end but this seems more intense somehow.

I've been doing a lot of circle paintings lately.... 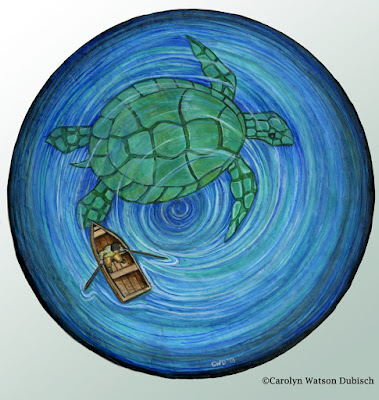 This one's on eBay right now. 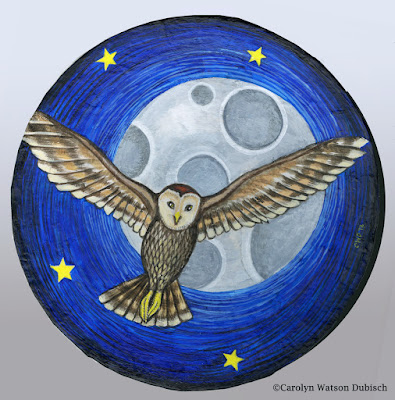 I've also been adding some to my Etsy Store "Painting in Circles".  Tomorrow the play Phoebe has been working very hard on with her theater group at school opens.  It's called "The Seussification of Romeo and Juliette", and we'll be attending this Friday.  She's been working in the costume department this time and has been having a blast!  Have a happy Wednesday. :)
Email Post
Labels: desert eBay etsy store Painting in Circles Summer

Duncan Watson said…
The water thing is serious. I heard the same line when I was in Israel. I even got yelled at once in the Mens room by someone peeking over my shoulder at the urinal.

Carolyn Watson-Dubisch said…
I'll try to keep up the water intake. Women may take forever to use the toilet, but at least no one is watching us pee.
April 4, 2013 at 7:06 AM