Well the sun seems to be rising earlier now, which means the days are finally getting longer, though it's still quite cold and snowy most of the time. Mike and I (and Naomi) managed to sneak out, while Chloe and Phoebe were in dress rehearsal last Thursday. We went to an art opening of contemporary art at a really beautiful hotel called the Design Hotel Suites. It was the first opening I ever went to that had a children's room for Naomi to play in while Mike and I walked around sipping wine and were actually able to enjoy the art exhibit. It was nice to go out, dress up and be adults.
Speaking of being an adult, I recently got my official "You are now old!" notice. My high school class is having it's 20 year reunion this November. Now that I can't possibly make it, I'm kind of interested in going.... Oh well. 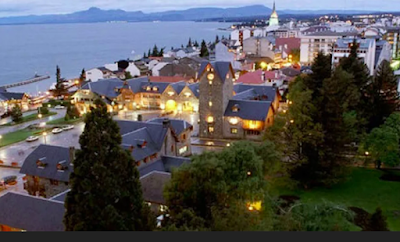 I seem to have become the face of the American mom living in Bariloche (I can't say Argentina, as there are several American mothers with blogs up in Buenos Aires.... Some of them are really informative and interesting too). This has led to a lot of questions regarding local schools, public and private. As far as the public schools here in Bariloche, there are no resources to help a foreign child integrate unless you chose a bilingual school. With little or no spanish they will either turn you away or suggest putting your child back a year. If your child speaks fluent spanish this is a possible option for you, though you will need to determine if a DNI (similar to social security #) is required (this is likely) and then go about getting one.*
Our priority was getting all three kids in the same school. For us, with our limited language skills (yes, still limited, unfortunately), dealing with the school can be the biggest challenge. There are many english speakers there (teachers, students, and the school head) but also many, many people who speak only spanish. The kids' school is the most complicated part of our life here. Getting uniforms, school events, days off for unfamiliar holidays, dealing with more than one school at once, in spanish, is more challenging than I'd want.
Schools at the primary level all have a jardin (pre-school/kindergarten) , so having the kids in one school was easily achieved. Also my girls were comforted knowing their sisters were nearby... especially my youngest who hid under a table the first week of school. They have all made friends and adjusted now, thankfully.

Some bilingual school options are:
Colegio Del Sol: This is my daughters' school so I put it first. It's a very small school with an intimate setting. One class for each grade. The teachers in the jardin ( this is 3,4, and 5 year olds, though 5 year olds are in a different class) are excellent and loving. All teachers here (in Argentina) are very affectionate with the students, hugs and kisses! This school will work with your kids' individual needs.
The morning is in spanish and the afternoon is english. They take a school transport to a local club for phys. education twice a week. They have art, music and computer once a week and do drama in english class. Twice a year each class goes camping over night together... at the jardin level it's a family camping trip! School hours are 8:30am-4:30 pm Mon.-Thurs, on Friday it's a half-day and they are dismissed at 12:30pm. The school goes up to 7th grade. it's located at km4 on Ave de los Pioneros in Melipal #243. The phone # is 441-057.

Woodville: This is an excellent option with a good academic program. They also have spanish in the morning and spend the afternoon with english. They cover all grades from jardin up to 12th. Their hours are similar to Colegio Del Sol. This school is a bit closer to the center, at km 2 on Ave de los Pioneros, # 3000. I was told that this is the most expensive private school in Bariloche. The phone # is 441-133 and they have a website www.woodville.org

Colorin Colorado: This is a jardin that goes up to 1st grade located in the
center of Bariloche. They have a nice facility and is a feeder school for Woodville when their jardin is full up. The school starts at 9am till 1:30pm, and has only an short english class. The phone# is 429-160 (be prepared to only speak spanish when calling). My husband just showed up and was able to talk with them this way.

Instito Primo Capraro: This school is from jardin to 7th grade. An excellent program with the best facilities I've seen. They never seem to have vacancies, but it's worth checking. They teach in spanish, german and english. The teachers are great, I'm good friends with one of them. Learning german and spanish at the same time may seem like a bit much... but the other kids are learning german and english at the same time so it's certainly possible. They are conveniently located in the city center at 40 Angel Gallardo, and phone # is 422-608. www.capraro.com.ar

There are other bilingual schools that I know very little about, but this is a start. Something that helped us when going to interview with realtors and school officials who only spoke spanish was signing on to altavista.babelfish.com (automatic translator) as an aid on their office computer or our laptop. Arranging these things takes more spanish than eating in a restaurant or buyings items at the store. We showed up here having studied spanish for only three months. We are doing better now, but it's still a challenge.
For anyone who's feeling up to it, I was recently interviewed about my books, my life here and my work on the play," The Secret Garden" , by a Bariloche online newspaper. The article is in spanish, por supuesto (of course), and the website is: www.nuevobariloche.com
For those of you in the States, a piece I wrote called "Jump Rope Songs" was published in the June issue of Hopscotch magazine. I believe you can find it at any Borders or Barnes& Noble.

This weekend is Naomi's birthday (our second party here) and then on the 27th and 28th is the big production. August is zipping by ...... Chau!

Soulskier said…
Nice work! I receive frequent inquires about the school's here, I will be sure to forward them this post. Suerte!
August 31, 2008 at 3:49 PM