On the kids first school break (after only two weeks of school), we took our trip through the Andes mountains and into neighboring Chile. We were heading to the port city of Puerto Montt and got on a bus on the Friday before Easter expecting a 3 hour bus ride.... It took seven... Unfortunately there were many unexpected stops and a giant mountain range in between this city and that one. Here's an excited Chloe as we wait for the bus. 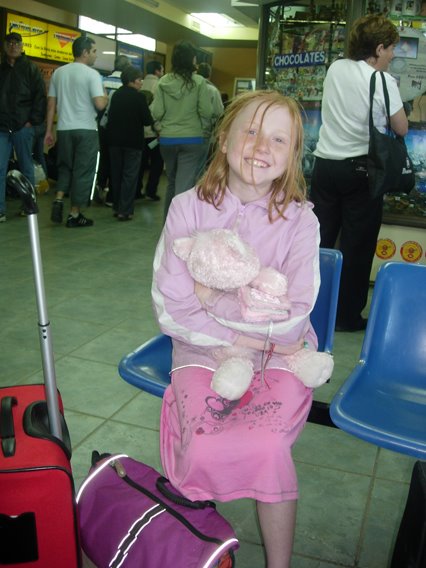 Naomi waiting patiently as we figured out which bus was ours. 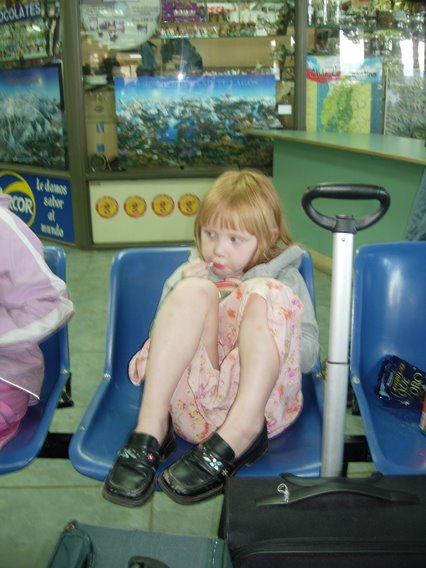 We sat in the front window of the huge bus and headed off away from the city and into the mountains. 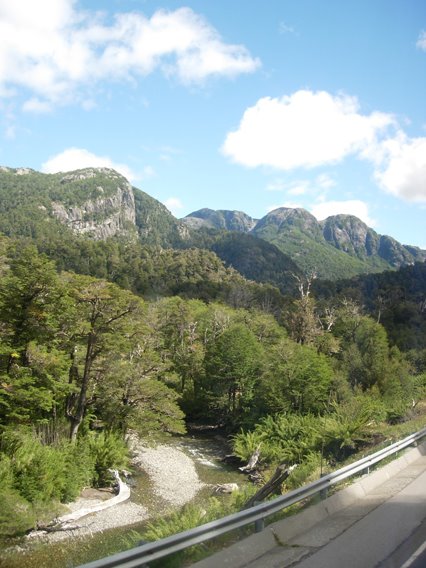 We wound our way through the Andes very slowly. It was a double decker bus and could easily tip. 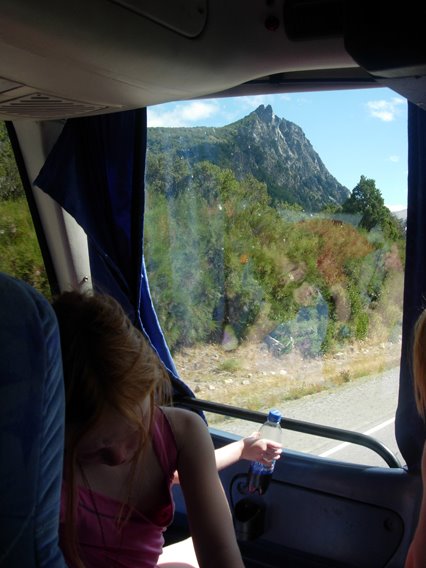 This is at the border as we entered Chile midway through the mountain range. The whole environment changed after this, the trees and forest became incredibly lush. It also started to rain. This side of the Andes gets all the rain and Argentina's side is much drier. As we left the forest it opened into farm lands and began to look a lot like upstate New York. That is until we saw a huge procession of people on the side of the road chanting and carrying a huge cross.... We were traveling on Good Friday. 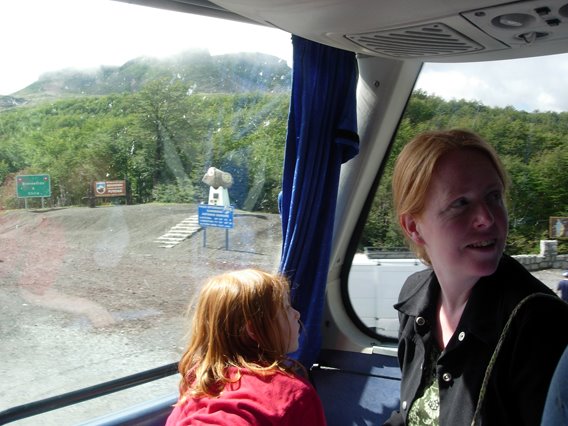 This was a shot of our first stop in Chile. A dismal looking little city called Osorno. There's a volcano nearby that people go to, but the city itself wasn't much to look at. 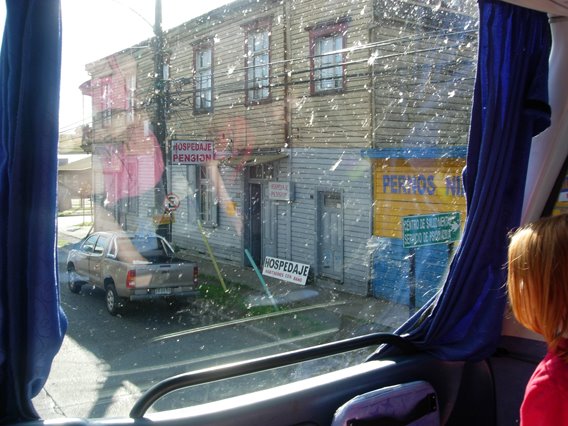 We finally arrived in Puerto Montt about four hours later than I thought it would take.
We wandered over to the cambio (money exchange) in the bus station and baffled the lady at the counter. Mike came back from the States with more U.S. dollars, some Euros his cousin gave him for the kids, and we of course also had Argentine pesos. So we decided to change all our currencies at once. We held up the line for some time. Then we found a cab and made our way to the Holiday Inn, ordered food and just collapsed into bed.

Mike and the kids sat by the water right outside of our hotel. We bought them some popcorn near the mall downstairs and start off to explore some of the city. 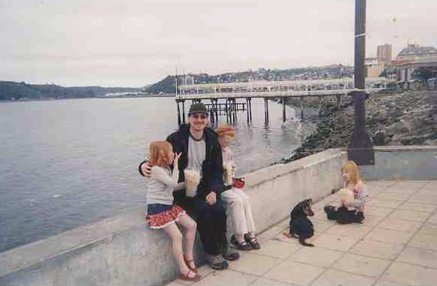 Here we are on the pier in the harbor. The dogs are our friends for the day as they shared the kids' popcorn. 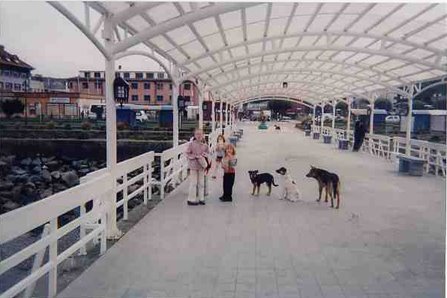 Next to the waterfront is this statue of giants. Mike and the kids climbed up next to them. 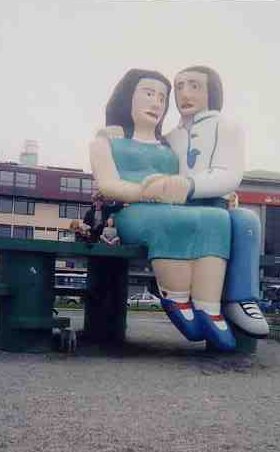 Naomi and Phoebe posing with the lady. 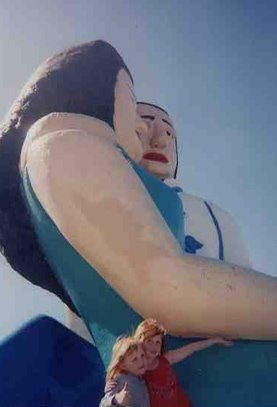 The kids loved this statue. Here's Naomi and Phoebe on his foot. 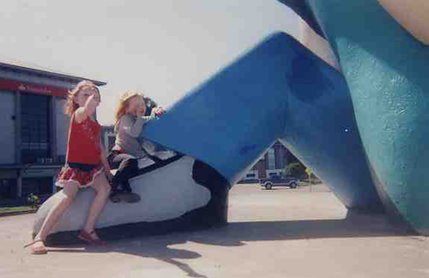 Here's Phoebe near the foot. 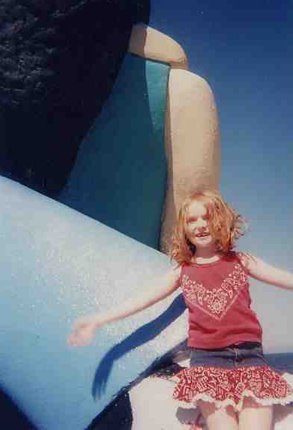 This is an old fishing boat that took tourists around the harbor. They called to us and beckoned, but by now we were starved for lunch, so we passed on it. It seemed like pushing our luck, getting into a rickety old boat named the "Titanic 2". 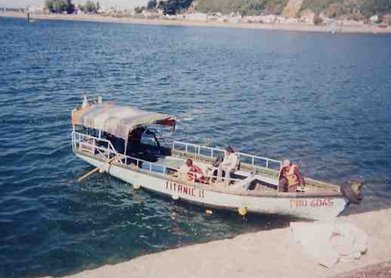 As we walked along the waterfront Phoebe with her sharp eyes found some money. Not money from Chile, or Argentina though... Actually we're not sure where it's from. I can't read any Asian languages, but it's definitely comes from a distant shore far from this one..... I'd love to know where.

At the water's edge was a giant white tower with a great view from the top. Of course my kids HAD to climb it. This is Chloe working her way up. 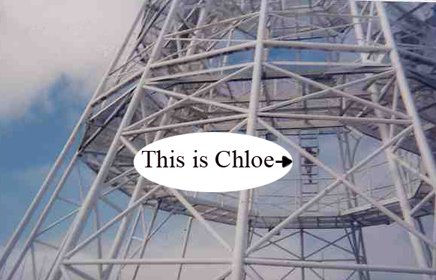 The girls and I made it to the top. As you can see I'm holding on. Someone with a black marker beat us here. 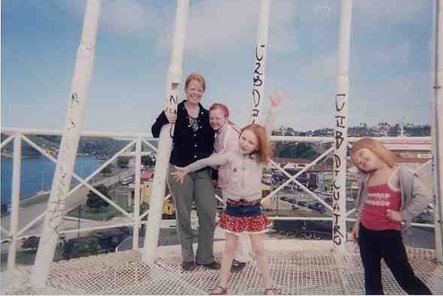 Here's Mike and Chloe at the top of the tower looking down. 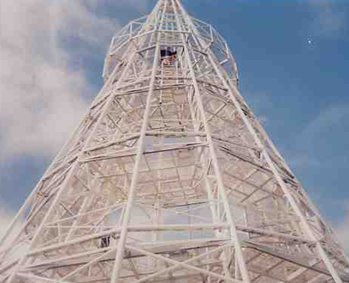 We left Puerto Montt on Easter Sunday in the early afternoon. We rode in the lower deck of the bus going back and they showed movies in English on the bus (with Spanish subtitles). The trip went very quickly compared to the first one, though I was worried about crossing back into Argentina. Because of Mike's delay coming home from the States we had to postpone our trip into Chile, so the girls and I had overstayed our visa by nearly a month. Oddly enough they didn't seem to notice when they stamped our passports, and we crossed the border with no questions or fees.
When we returned to Bariloche that Sunday, it really felt like coming home. Argentina was home, our new little kitten was fine and really happy to see us.
Email Post
Labels: boat border crossing bus Chile Giant couple sculpture international border man carrying cross passports Puerto Montt travel