Another chalk festival, this time in Tempe!

Having the Phoenix Chalk festival this past Saturday meant that the week leading up to it was a jumble of preparation for me.  First I was interviewed for the Arizona Republic on Tuesday, and then I drew on camera for a TV spot on the CBS Morning Show, on Thursday (aired on Saturday, though).

Friday night I taught another paint party for a very nice lady's 50th birthday party.  During the party,  I had an Arizona moment when I realized I was one of three people there that hadn't been stung by a scorpion.  It was a bit alarming.

For the chalk festival I submitted a painting I sold in 2013 called "The Snake Mandala". 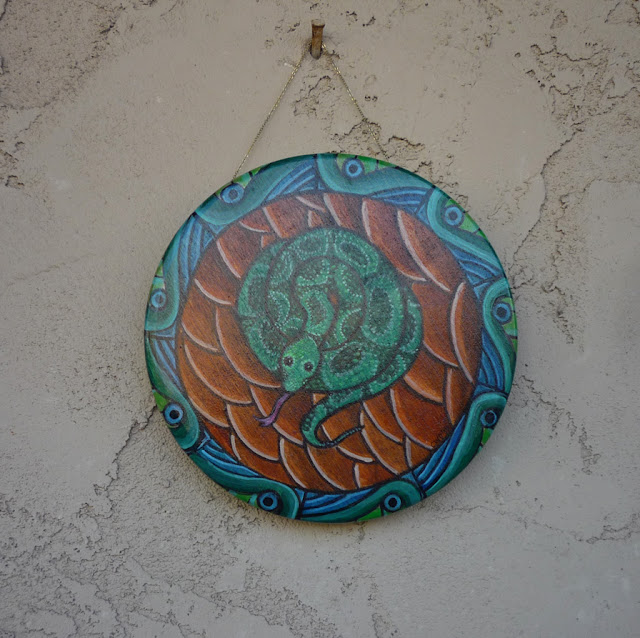 I redesigned it to be a square (which is what my space always is).  So it looked like this... 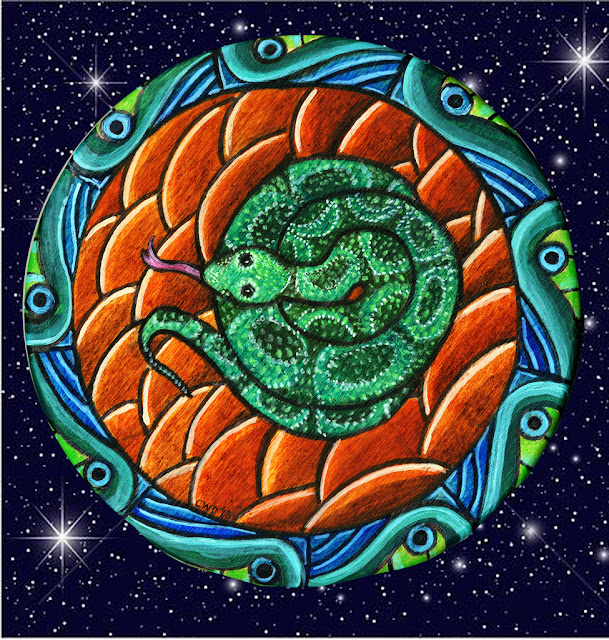 The morning of the festival came all too quickly (and early for a Saturday!). My daughter Phoebe was assisting me this time. We were unfortunately placed in the sun that morning as our umbrella was casting its shadow in the wrong direction. 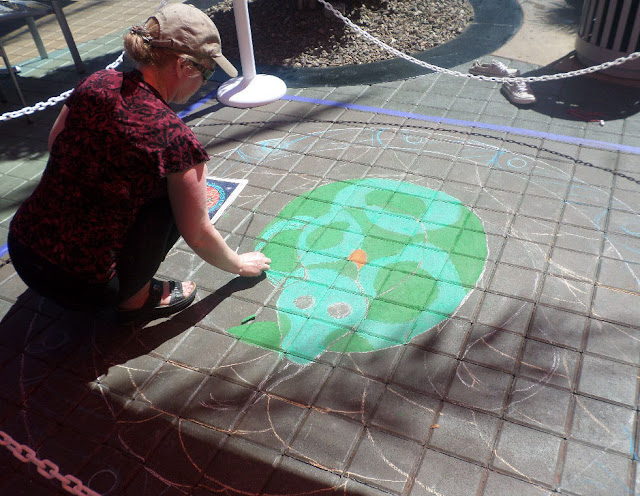 Here I am getting started with some base colors on the snake. 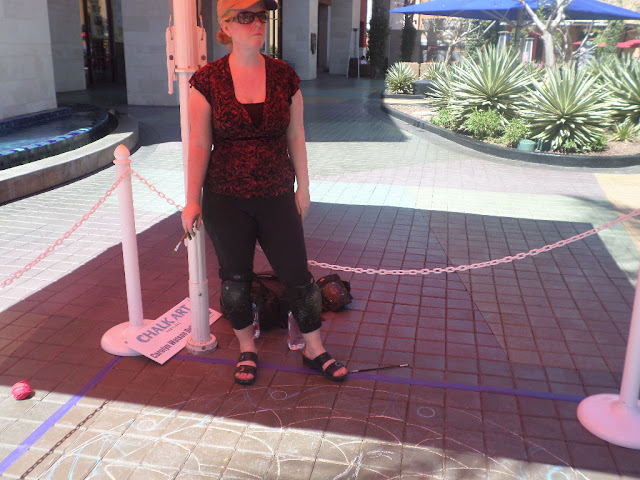 Every few minutes we had to take a sun break.  It was pretty hot that morning. 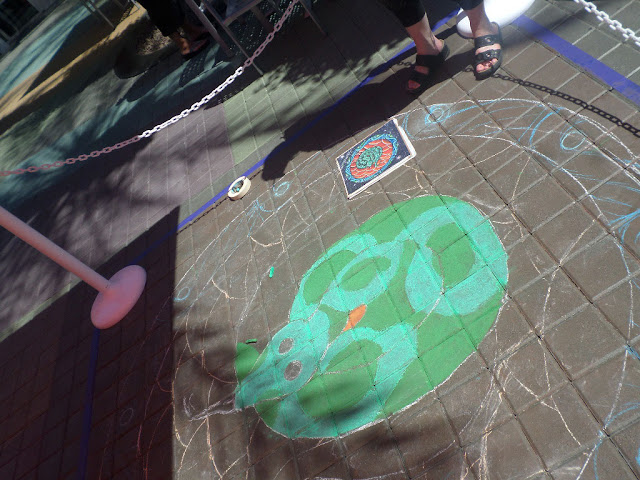 Finally, the base colors were done. 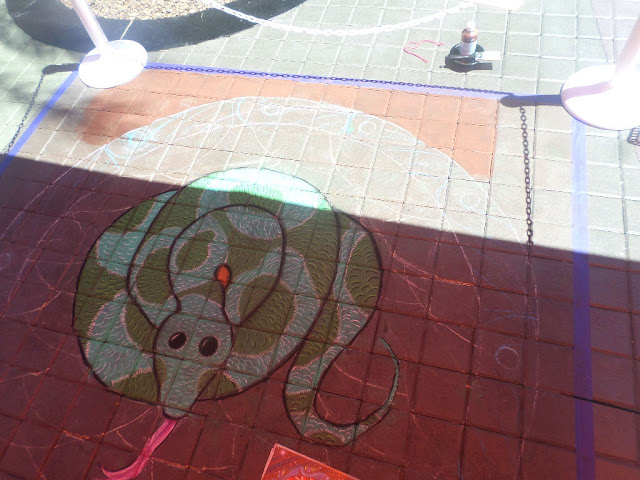 Shade crept upon us as we added the details to the snake. 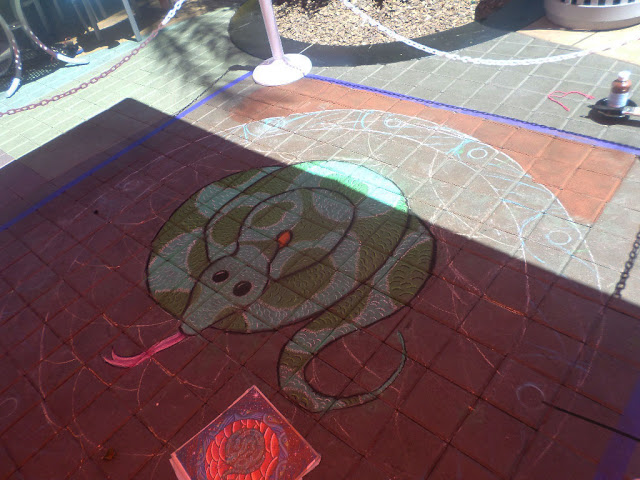 The morning was such a challenge.  Not just because of the sun, but because of our location next to the children's fountain.  Kids were splashing water about 4 feet from where we were working. 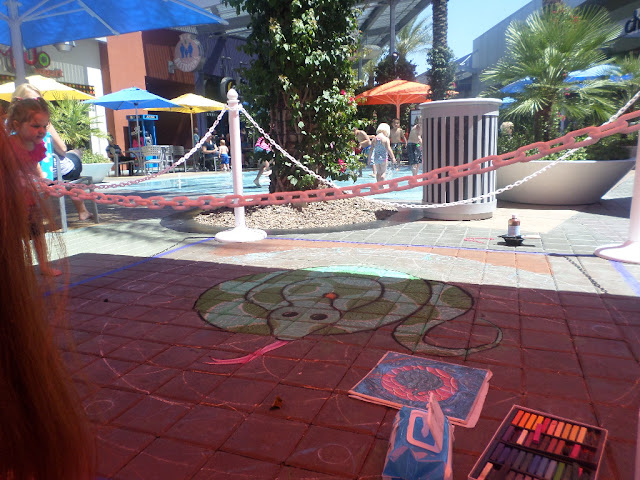 Here you can see the children in the background. I moved that trash can there to deflect some of the water. 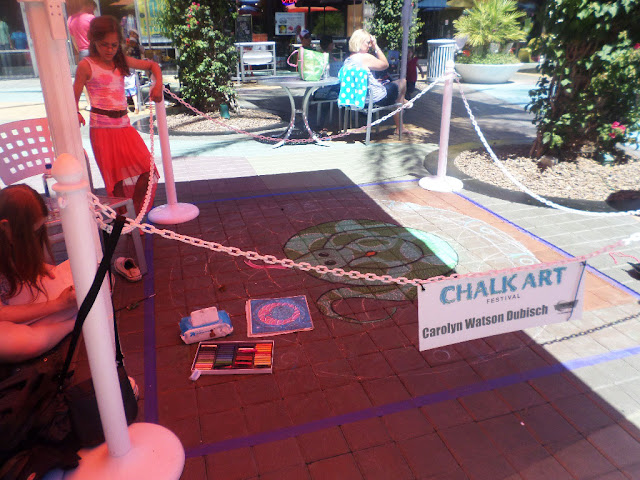 After a morning of drawing in the sun and repairing water spots from excited toddlers, we were both ready for lunch! 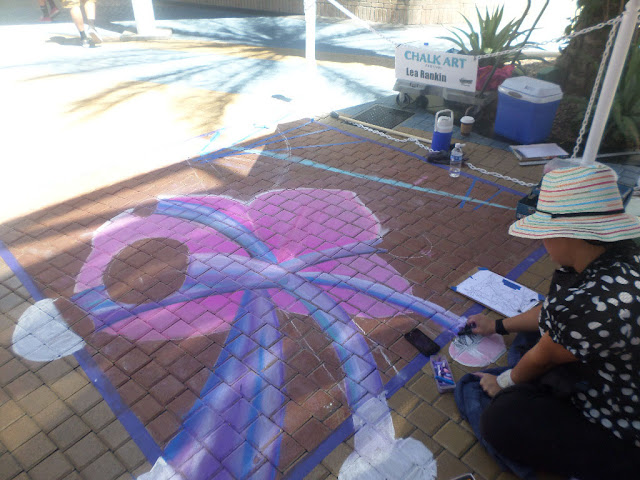 On our way to the Chipotle we stopped to look at Lea Rankin's flower mural. 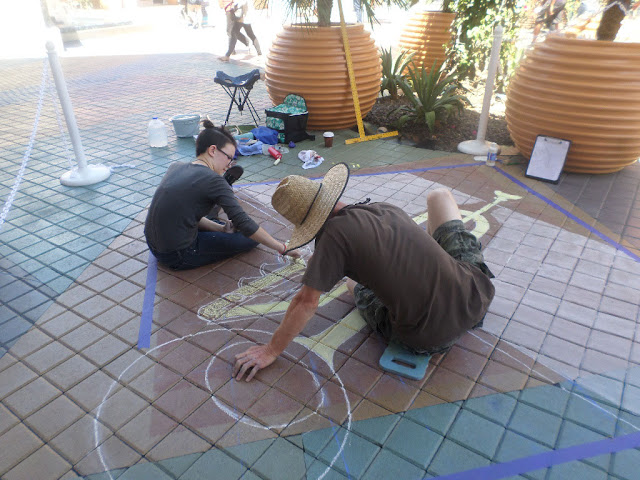 This is Ian Rankin and his daughter creating a giant trombone on the sidewalk. 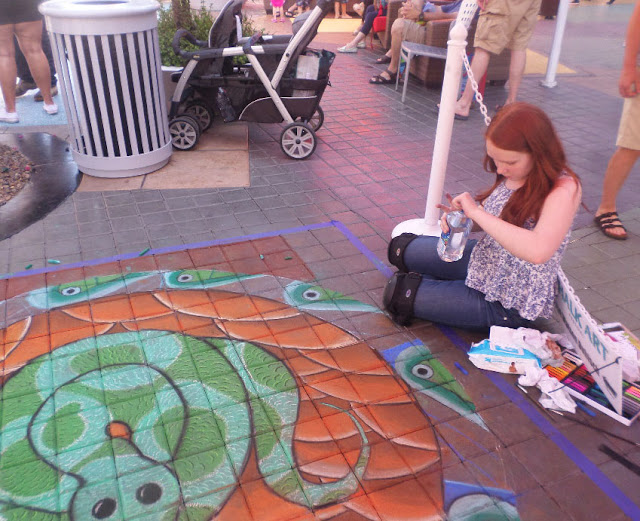 After lunch, we had shade which was awesome!  Here's Phoebe working on the edge. 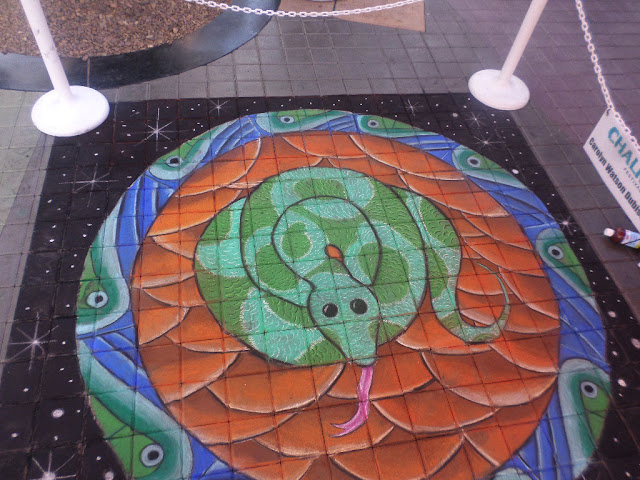 Finally very close to our 6pm deadline we finished! 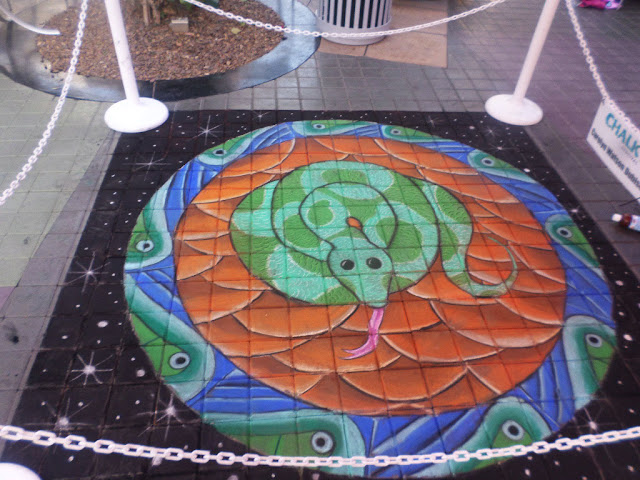 It was quite a relief to be done.  The one-day festivals are always epic!  Anyway, people kept asking me how long this would be up.  I had to answer that it would be two or three days at best this close to the splash zone! 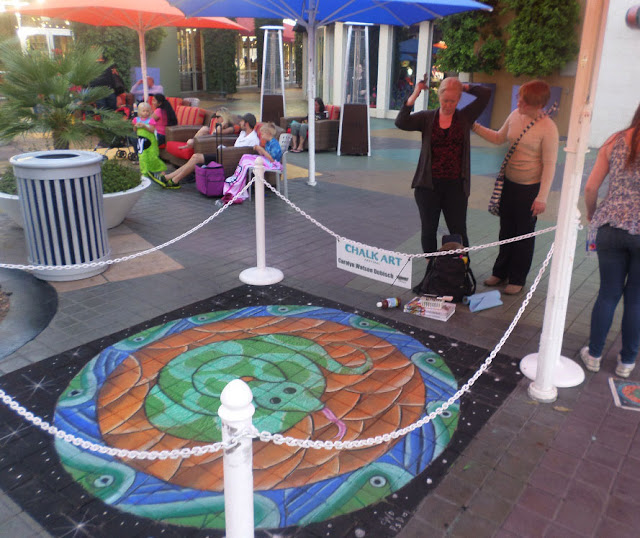 This is me at the end of the day with Naomi (she came out with the rest of the family to pick us up). 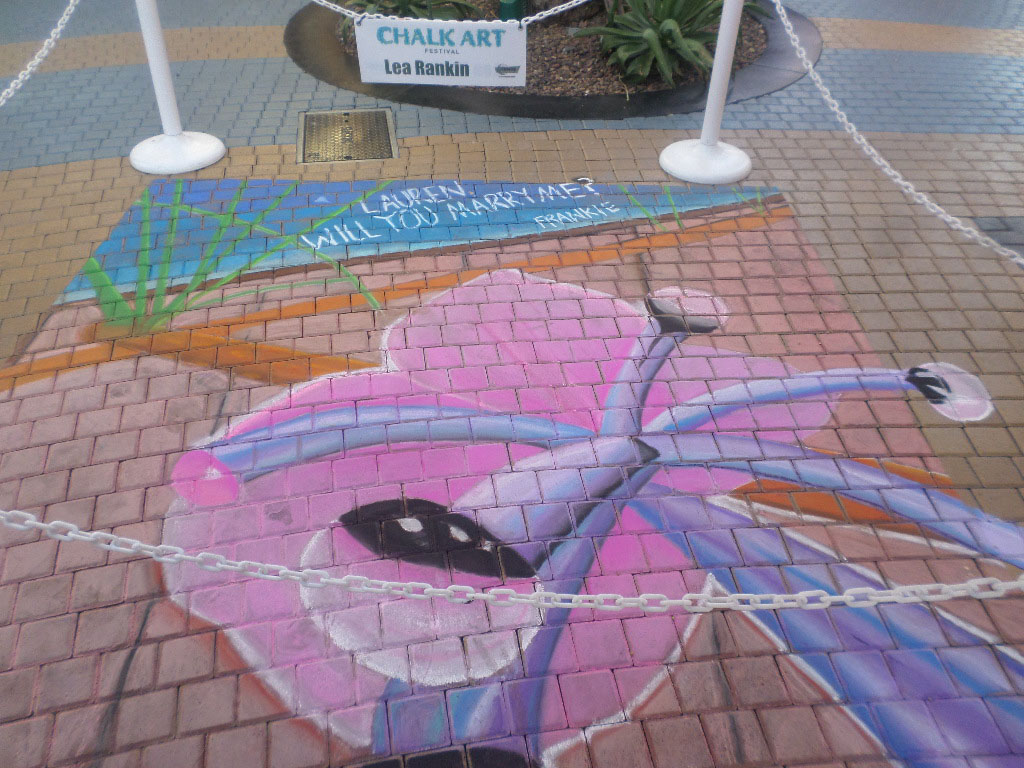