The Lull in the Storm

I'm involved in a new project now that has me very excited. It's called "Unseen Horrors". Artists and animators worldwide are contributing to a collection of films, where we are visualizing old time radio dramas. The one I'm working on is called "Final Resting Place", and I´m the chief designer on it. It's great to be involved in a film. This is my first image for it... 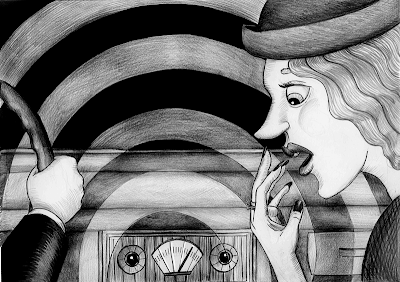 It's a very funny program, though I guess it was supposed to be scary. The woman is so-o pathetic and helpless and her husband sounds exactly like "The Professor" in "The Power Puff Girls". Anyway the last film by this company was called "Night of the Living Dead Reanimated" and was shown across Australia, New Zealand, streaming video screenings,and most recently in Arizona.
This is a link to the audio file...


The storms have been pretty constant here this week, but I'll take a lot of water over snow anyday. For us it mostly means many detours driving the kids to school as so many roads are flooded.
We took advantage of a window in the storm a few days ago to go see Chicano Park. It has the most murals of any location in North America, so I've been curious.

These were all painted by well known Mexican muralists.

This one of many faces was impressive.

Some have been "tagged" by grafitti artists. My friend was a well known muralist in Upstate New York and he hated when grafitti artists did this to his work. In an interview he caused some controversy once. The reporter asked him what he thought of grafitti artists (thinking muralists and grafitti artists were not that far off from each other), and he said "They are like dogs marking their territory!" I guess he made some enemies.

This is Chloe by the fountain.

Then the wind picked up and the rain started coming in fast...

After prying Naomi off the swing we climbed back into the car, quite a bit wetter.
Email Post
Labels: Chicano Park Final Resting Place floooding mural storms Unseen Horrors